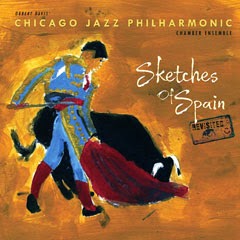 The Chicago Jazz Philharmonic, celebrating its upcoming tenth anniversary year, releases its second full-length album, Sketches Of Spain [Revisited], an orchestral transformation of the 1960 iconic original by Miles Davis and Gil Evans. For this reinterpretation of the 1960 classic recording, CJP artistic director and composer Orbert Davis created two new compositions, incorporated traditional African and Middle Eastern instruments, and made numerous modifications in ensemble orchestration. The result is an intimate yet powerful performance that transports the listener to a different world.

Davis’ involvement with Sketches Of Spain began in the 1990’s when, as a trumpeter in Bill Russo’s Chicago Jazz Ensemble, he was asked to perform the solo trumpet part originally played by Miles Davis (no relation). A particular challenge was to disregard the expectations of some purists that the original performance would be re-created. “However,” Orbert notes, “What Miles played is not intended to be duplicated. Miles reached past the technical aspects of his instrument and played from the depths of his soul. I took that approach to freely create during the improvised sections.”

Orbert Davis’ version of the classic work developed over many subsequent performances and years of studying the original recording, as well as Spanish music and culture. From the first performance with his own Chicago Jazz Philharmonic in 2011, Orbert introduced new elements to reflect the Moorish influences on Spanish culture, introduces new infectious jazz grooves, and highlights the unique talents of individual musicians in his ensemble. 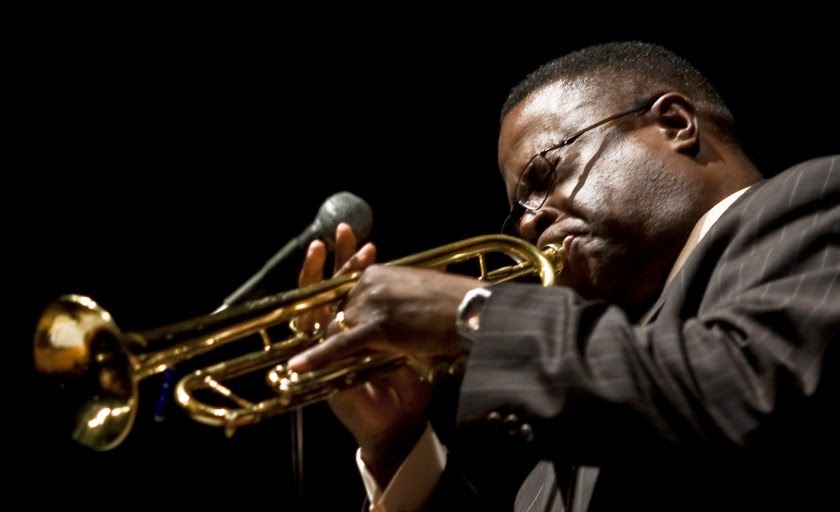 Working together, the musicians have created a sound based on Spanish culture that is a blend of classical aesthetic and jazz sensibility, revealing an emotional depth that is universally recognizable. “I hope that the listener will be able to identify with the passion and emotion expressed in this work”, says Davis. “There is a story behind the music, and each person needs to interpret that story for themselves.”
The theme of creatively reinterpreting a classic is carried out on the album’s cover, which features original artwork created as part of a CD Cover Art Contest held by CJP in the spring of 2014. The contest required Chicago area students to interpret different visual aspects of Spanish culture: a matador, a flamenco dancer, and a mountain village scene. The winning entry was submitted by Jaylyn Scott, a 14-year-old Orland Junior High School student. As contest winner, Jaylyn was awarded a cash prize and will receive royalties on the sale of all related merchandise like posters, mugs and t-shirts. The multi-talented Jaylyn is also a student in the CJP Summer Jazz Academy where she studies the saxophone. 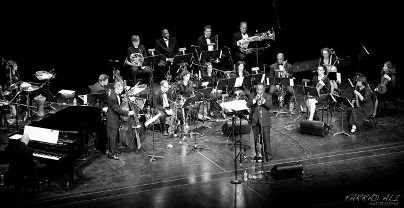 Orbert Davis and Chicago Jazz Philharmonic have been invited to the Havana Jazz Plaza Festival, one of the most important events of the genre in the Caribbean area, and as always is done before Christmas, so that attendees can not only enjoy "Sketches of Spain" but also of the versions they do "Havana Blues".

Sketches of Spain is an album by Miles Davis, recorded between November 1959 and March 1960 at the Columbia 30th Street Studio in New York City. An extended version of the second movement of Joaquin Rodrigo's Concierto de Aranjuez is included, as well as a song called "Will o' the Wisp", from the ballet El amor brujo by Manuel de Falla. Sketches of Spain is an exemplary recording of Third Stream, a musical fusion of jazz, European classical, and styles of world music.
The album pairs Davis with arranger and composer Gil Evans, with whom he had collaborated on several other projects, on a program of compositions largely derived from the Spanish folk tradition. Evans explained: [We] hadn't intended to make a Spanish album. We were just going to do the Concierto de Aranjuez. A friend of Miles gave him the only album in existence with that piece. He brought it back to New York and I copied the music off the record because there was no score. By the time we did that, we began to listen to other folk music, music played in clubs in Spain... So we learned a lot from that and it ended up being a Spanish album. The Rodrigo, the melody is so beautiful. It's such a strong song. I was so thrilled with that.