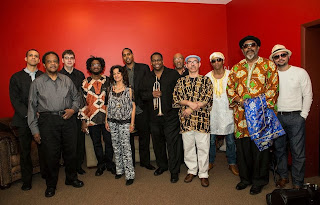 Gail Boyd opens the year showcase some of their star performers on a big show on January 12, 2014

This is the invitation that makes us reach our friends and relatives of Gail Boyd / Artist Management for the exclusive presentation of some of their stars in Jazz.

Of course it is a great opportunity for critics, radio host and journalists specialists in our genre: Jazz to be very close to these great figures of art and music to make your own conclusions.

Approximately three and a half will be of great music and great camaraderie hours!


This video was a presentation by Alex Diaz and His Merengue Jazz Site Zinc Bar in New York
City, during this year.
The theme is "Yesterdays" Jerome Kern composition, well groomed with a unique rhythm and pace, album belongs to Beyond145th Street where musicians are:
Alex Diaz-Congas
Ivan Renta-Sax
Pedro Bermudez-Piano
Ruben Rodriguez-Bass
Diego Lopez-Drums 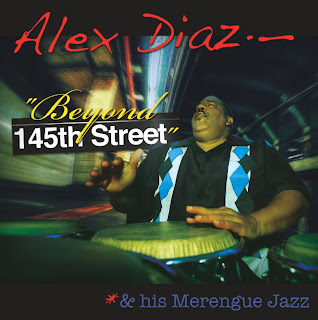 Alex Diaz is also known as  'Merengue Jazz King'
Born in Bani, Dominican Republic, Alex Diaz began playing music at an early age. At age 10 he enrolled at Jose Reyes Music School in his hometown. Soon he was lead snare drum in his town’s Municipal Band under Professor Amable Botello. A couple of years later he found himself performing with local bands such as Nina “ El Gago”, “Yeyen” y su Bajo, “los Antillanos del Sabor” among other popular bands of the region. At age 16 je joined the group “Los Juveniles del Sabor”, whose lead vocalist were Ruby Perez and Aramis Camilo. Both considered among the best in the country. He continued to perform with local acts such as Julita del Rio and “ Sonido Latino.”

In 1980 a young Alex came to the big apple New York City to try out the scene. His first gig was with Victor White, Dominican merengue singer famous with wilfrido Vargas. Then the big break came, a call from Jazz Pianist Hilton Ruiz. Alex will get the job and go on tour for the next two years making a name for himself among NYC finest percussionists. Soon after that his career took off performing with big names such as Tito Puente, Jose Figaro, Chucho Valdez, Mario Bauza and the Afro Cuban Ban, Dizzy Gillespie and the United Nations Orch., Xavier Cougart, Ceila Cruz, Alfredo “ Chocolate” Armenteros, Cachoao, just to name a few. 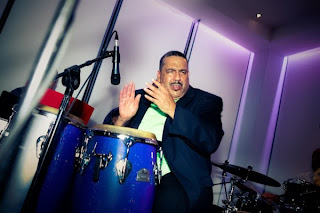 Still in New York, Alex Diaz keeps busy performing with “ Son de la calle” around New York City and the world’s biggest venues. He is considered the pioneer of the merengue-jazz concept, inherited by his mentor the great Mario Rivera” El Comandante”, considered the best Dominican musician ever! His latest project “ The Bebop Bogaloo Kings” is the First of many attempts in combining Jazz and Contemporary music with Santo Dominigo’s folkloric beat “ merengue” His career is just taking of and lots of sounds will be heard from “ The King of the Merengue Jazz”.
Publicado por Unknown en 16:48 No hay comentarios:

The pianist and composer Rober Prester launches "Dogtown" after Christmas 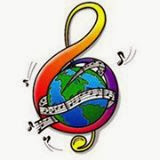 In this Christmas and after the party is large and continues at the Blue Note, NYC