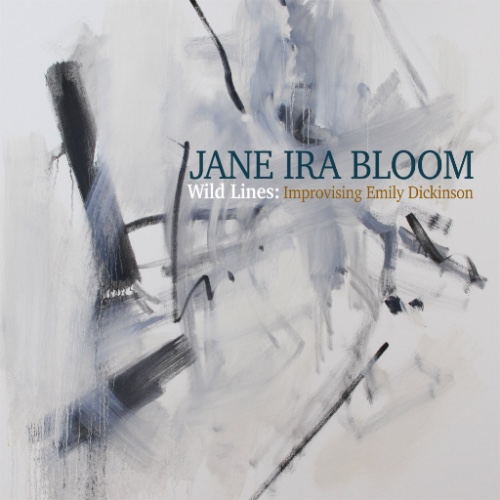 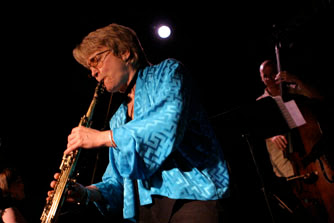 The party of singer Elijah Rock on the occasion of his new CD "Gershwin for My Soul" will be on August 3, 2017 at Catalina Jazz Club 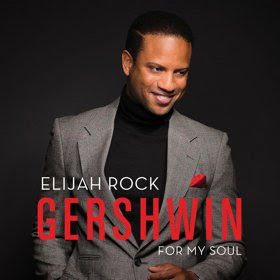 The CD:
"Gershwin for My Soul"
Elijah Rock

Long-dedicated to upholding and aligning himself with the first class carriage and aesthetic of timeless entertainment, singer/actor/dancer Elijah Rock is carrying the blazing torch for the legacy of George & Ira Gershwin, bringing a contemporary and decidedly African American twist to their timeless music with several forward thinking projects.
"Gershwin For My Soul" (released April 18) is the Cleveland-born baritone's brand new critically acclaimed album. Jazziz magazine marvels, "Rock brings both chops and emotion to his masculine yet sensitive delivery." Rock travelled to Thailand to star and make his directorial debut in a gorgeous music video for the lead single/title track "Gershwin For My Soul" that is bringing a sensual touch of class to video outlets around the globe. Rock and his lovely co-star cavort in the sun-dappled climes and evening breezes of Phuket interspersed with Elijah crooning about the timeless grace of Gershwin and sumptuous amour - thus Elijah's new moniker, "Mr. Romance."
It is but one of 12 masterful performances on the album, produced and arranged by Grammy-winning keyboardist/musical director Kevin Toney to bring the music of Gershwin into its rightful contemporary space, ably aided by bassist John B. Williams and drummer Greg Paul, plus guitarists Jacques Lesure and John Storie. The arrangements range from hiply syncopated updates on "Fascinating Rhythm" and "Our Love is Here to Stay" to Rock milking the rarely heard extended introduction to "How Long Has This Been Going On?" (before it falls like feathers into a soft brushed blues) and a version of the delightful "S'Wonderful" in a tender take that recalls the spirit of recently departed Al Jarreau. The album represents a full circle journey for Rock who started singing at 8 in church followed by his first Gershwin songs from "Porgy & Bess" at 16 at the Cleveland Institute of Music.
That connection is key to Elijah Rock reviving the music of "Porgy & Bess" in a revolutionary new presentation that takes what was originally written as an Opera then turned into a Broadway musical into a pure jazz adaptation. Utilizing the story as retold in the most recent Broadway book written by Suzan Lori Parks, with Kevin Toney's sparkling arrangements for 5-piece band and Rock in the role of "Porgy" with a scaled down cast, this "Porgy & Bess" premiered at the 300-seat Ensemble Theater in Santa Barbara, California to raves from audiences bowled over by the intimacy, the freshness and Rock's mastery.
NAACP Theater Award-winning triple threat Rock sailed into these latest endeavors on the wings of glowing acclaim for his stage performances of the characters 'Crooner' in "Words by Ira Gershwin" and of the legendary Cotton Club star Cab Calloway in the musical revue "I Only Have Eyes For You" for which he was nominated for a 2016 Ovation Theatre Award. The Glendale News raved, "Baritone Rock, with charm to spare, shifts smoothly from crisp jazz phrasings to the operatic..." The Hollywood Progressive proclaimed, "The youthful Rock, who appears in Showtime's TV series 'Masters of Sex,' is establishing himself as one of his generation's foremost interpreters and performers of The Great American Songbook."
Elijah Rock on "Gershwin For My Soul":
"Before this experience, I hadn't really embraced the balladeer aspect of my gift," Rock muses. "It was about me being vulnerable enough to know I could do it. It's been an interesting transformation for me." Ultimately, Elijah Rock will be wowing longtime lovers of Gershwin music as he cultivates a younger audience with his all-around showmanship, singing and even his paddle-n-roll style of tap dancing - lost arts all that have found in Rock a tireless cultural savior.
"I believe there is a cross demographic that this music will serve," Rock concludes. "I am grateful to Tony Bennett, Cécile McLorin Savlant, Gregory Porter, Diana Krall and Michael Bublé for their success in keeping the music relevant to today's pop world. I approach singing from a traditional perspective with a fresh twist. 'Gershwin For My Soul' not only represents America's classical music, it will give me a platform to address a lot of other things about the culture and where we all stand today."

The prestigious Catalina Jazz Club, in Hollywood, California, will receive on August 3, 2017 Elijah Rock and his musicians, later on September 7 this year the toast will be at Vitello's, in Studio City, CA. 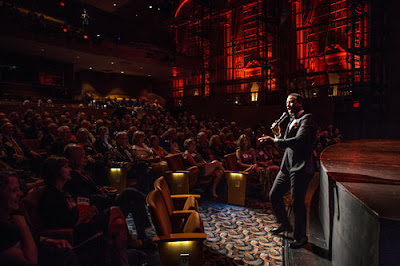 Elijah Rock's Notes:
Actor/Singer/Writer/Producer/Dancer and self-proclaimed “Artrepreneur” Elijah Rock has left few stones unturned in his quest for performance art excellence since leaving his native Cleveland, Ohio. He not only seeks out challenging creative opportunities, he creates them – in the spotlight and behind the scenes.

Winner of the 2014 NAACP Theater Award for Best Male Equity performer in “Breath and Imagination: The Story of Roland Hayes,” Elijah Rock recently wowed critics and audiences with performances starring as Porgy in the first ever jazz adaptation of  “Porgy and Bess” (Ensemble Theatre-Santa Barbara). Rock was also Nominated for a 2016 Ovation Award for Best Featured Male Performer as the legendary Harlem show man Cab Calloway in “I Only Have Eyes For You: The Life and Lyrics of Al Dubin” (Ricardo Montalban Theater – Hollywood).  In Television, Rock appeared as a recurring guest star in the second season of the spicy Showtime Television series “Masters of Sex,” before reprising his award-winning role as ‘Roland Hayes’ at ArtsEmerson’s historical Paramount Theater in Boston (where he also sang the National Anthem at the 2015 State of the City Address for Mayor Marty Walsh in Boston Symphony Hall). As a producer, Rock has teemed up with award-winning director/writer Antwone Fisher to produce the history-rich big screen biopic “Lincoln Perry – The Life of Stepin Fetchit.”

As the Crooner in the musical play, “Words by Ira Gershwin” Rock’s participation on that musical expose’ of the legendary Tin Pan Alley genius’s, inspired Elijah to record in 2016 a contemporary twist to the music of George & Ira Gershwin via the innovative Gershwin For My Soul (produced by pianist, arranger and composer Kevin Toney of `70s Soul-Jazz band The Blackbirds). It is currently making its way up the jazz charts. Targeting performance arts centers and playhouses as well as traditional music venues, Elijah will bring a unique live presentation of this music with theatrical, staging, choreography and lighting elements that position the show as more than a stand-up vocal concert yet not quite a full-on musical. Directed by Saundra McClain (who helmed his NAACP Award-winning performance in “Breath and Imagination”), Elijah’s vision for the Gershwin project – and all of his endeavors – must be experienced to be fully understood and deeply appreciated.

Born and raised in Cleveland, Ohio, Rock grew up singing in Lee Heights Community Church and as a student at University School- preparatory school for boys, from which he was discovered by The Cleveland Orchestra Children’s Chorus and The Cleveland Opera Children’s Chorus. He was a boy soprano until his voice changed and he joined the Cleveland Singing Angels as a soloist. Thus, he fell in love with Classical Voice, Theatre Performance and later, Jazz Performance and Jazz Tap.  As a high school youth, Rock studied bel canto singing and acting at the world-renowned Interlochen Arts Camp for two summers under the tutelage of Beverly Rinaldi. In his senior year, he had the honor of being one of the first vocalists to be accepted into the prestigious Cleveland Institute of Music (CIM) Young Artist Program where he continued his studies with Ms. Rinaldi. It was also in Cleveland, where he studied theatre drama, dance, improvisational and sketch comedy at the Karamu House Theatre – the oldest long-running African American theatre in the country. Furthering his roots in African American forms of classical music, Elijah went on to become a soloist for the renown ‘Albert McNeil, Los Angeles Jubilee Singers,’ singing Negro Spiritual music in concert halls around the world. It’s no wonder, that when Rock discovered the likes of Paul Robeson, Roland Hayes, Earl Jeffries, Al Hibbler, Arthur Prysock, Joe Williams and Sammy Davis, Jr. at an early age, he would find his calling and devote his life to the Classical Performing Arts, Theatre and The Great American Songbook.

Rock’s diverse skill set has landed him lead roles in theatre productions off-Broadway and in regional theatres across the country. Works include starring as ‘Roland Hayes’ in “Breath and Imagination,” at the ArtsEmerson Paramount Theater in Boston and The Cleveland Playhouse (where he was recognized with Superior Achievement by the 2014 Cleveland Critics Circle Awards), August Wilson’s ‘Cory’ in “Fences,” ‘Youngblood’ in “Jitney,” “Vaudeville,” “To Be Young Gifted and Black” and ‘Ace of Spades’ in “Hoodoo Love.”  Musicals include the iconic lead role of ‘Coalhouse Walker, Jr.,’ in “Ragtime,” ‘Adrian’ in “Smokey Joe’s Café,” “Baby It’s You,” “Sophisticated Ladies,” “Paradise,” as ‘Tater’ (a World Premier Bluegrass Musical) and ‘Anatoly’ in “Chess” at the East West Players, and the ‘Crooner’ in “Words by Ira Gershwin”.  Rock’s short film “Lunch with Jeremiah” in which he co-wrote, co-produced and co-starred has screened at the 2013 Hollywood Black Film Festival (HBFF), 2013 NYLA International Film Festival and the 2014 Los Angeles Pan African Film Festival.

An Executive Vice President (EVP) of Artistic Services with Fantank LLC, Rock is merging Arts & Entertainment and internet technology. The start up is the worlds’ premier provider of data, news, information technology, solutions, analytics and services that gives humanity access to a network of information, people and ideas so they can make better informed decisions during their talent scouting, content consumption, talent investment, collaboration or even when simply surveying the Arts & Entertainment industry landscape around them from their desktops, tablets or mobile devices. In content production, he is a founding partner of Decipher Entertainment, which creates intellectual property through the art of cultivating rich and diverse images. Decipher constantly reevaluates between entertainment, the industry and it’s interactivity in culture. Rock is dedicated to producing content that has universal appeal and uniquely reflects our humanity. He resides both in Los Angeles, CA, and New York City.