Soulful.  Melodic.  Authentic. Jazz music. THE BAYLOR PROJECT
Be A Light proudly announces the February 10 release of “The Journey”, the debut album from visionary duo The Baylor Project. Steeped in the heart and soul of jazz, Marcus and Jean Baylor’s highly anticipated collaboration showcases the grace and glory, versatility and virtuosity of a truly extraordinary musical.

Joining Marcus and Jean on their self-produced debut is an expansive assemblage of top-notch collaborators including pianists Allyn Johnson and Shedrick Mitchell, guitarists Rayfield “Ray Ray” Holloman and Marvin Sewell, bassists Dezron Douglas, Chris Smith, David “DJ” Ginyard and Corcoran Holt, percussionists Pablo Batista and Aaron Draper, tenor saxophonists Keith Loftis and Bob Mintzer, trumpeters Freddie Hendrix and Keyon Harrold, trombonist Stafford Hunter and harpist Brandee Younger.
As the children of Pastors, Marcus and Jean's musical roots were planted deep within the church, and it was there that the road was paved for the influence of gospel, blues, soul, and jazz to make it’s mark. On ”The Journey”, listeners are taken on a comprehensive musical journey that showcases as much versatility as it does virtuosity. A world-class drummer, Marcus’ creativity and innovative storytelling ability expose his seasoned improvisation and musicianship. Jean, with her agile mezzo-soprano range, combines a fresh, whimsical, approach to phrasing with clever musicality resulting in soul-hugging vocal purity. Released around Valentine’s Day in February, “The Journey” has as much to do with the The Baylor’s 15 years of loving one another as it does with Black History Month. Their first feature recording together embodies the true spirit of love while also paying homage to their musical roots and those of the African American experience.
“The Journey is a true reflection of our childhood, the musical and cultural influence of the African American Church, and all the things that have become a part of our creative fabric from then until now,” says Jean. As co-creators of their label Be A Light, Marcus and Jean served as the sole producers of “The Journey”. “As producers, we were involved in every aspect of the project from inception to completion,” says Marcus, adding, “...from songwriting, arranging and collaborating with great musicians to cultivate the sound we heard in our heads, we loved having the autonomy to create music from the inside out.”
Anchored by their exceptional band, The Baylor Project made their live debut in 2013 at Smoke Jazz Club to critical acclaim. Such a success, they were extended an invitation to remain in residency at Smoke for the coming year. “Performing on a regular basis not only gave us the opportunity to evolve as a band, but to build a buzz and anticipation for The Baylor Project,” says Marcus. The buzz was certainly built; word-of-mouth brought packed houses at the famed Blue Note, Apollo Music Café, and DC’s Blues Alley, leading to performances in premiere jazz festivals across the United States and Europe—a glamorous arrival for two people from humble beginnings. Marcus is a native of Ferguson, MO and Jean, a native of Moorestown, New Jersey.  Both grew up in a tradition that imprinted itself upon their craft.
It is apropo that it was their craft that brought them together back in 2000. It was then that Jean was set to perform at a showcase and found herself in need of a new drummer.  On a fellow musician’s referral, Marcus and Jean were connected for the first time through music.  As a close friend tells the story, Marcus fell in love with her that night on stage. 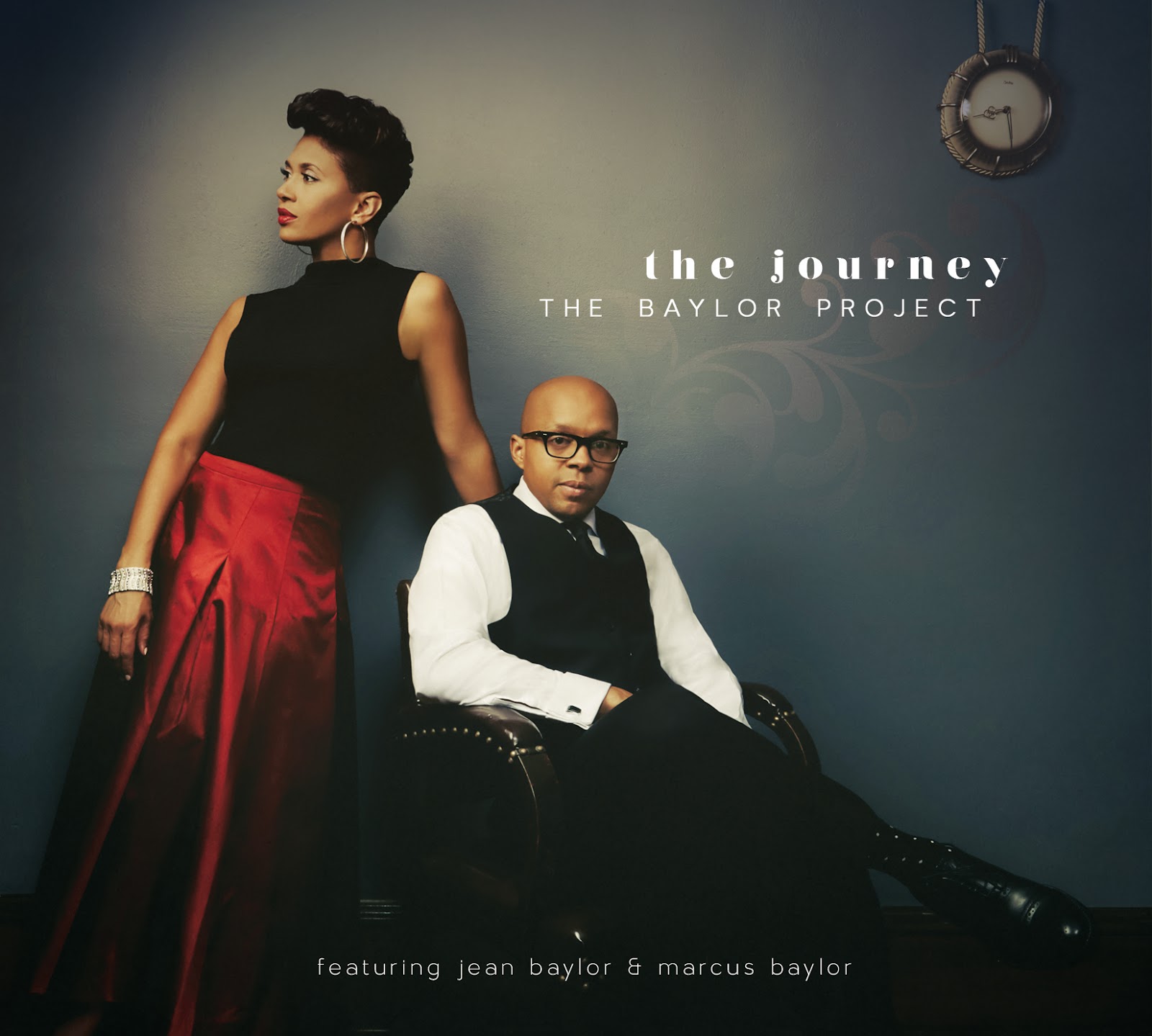 With “The Journey,” the Baylor Project showcases their outstanding versatility with a dynamic collection of original compositions, newly arranged standards and reimagined hymns. Upon pressing play, listeners are transported into the heart of the black experience: inside a little church in the mountains of West Virginia built by Jean’s ancestors, hands are clapping, feet are stomping on time tested hardwood floors, and voices testify to the power of prayer in song. “Block Party” is the joyful introduction to the Baylor Project rife with the church blues and jazz improvisation.


What follows is the Baylor’s signature arrangement of the stalwart hymn “Great Is Thy Faithfulness” and their lush arrangement of the Herbie Hancock classic “Tell Me A Story”, which is enhanced by original lyrics penned by Jean.
A restorative hymn for healing and forgiveness begins the original composition “Again” which then gives way to a full swing orchestration with horns and strings featuring explosive solos. On the following track, the Baylors present a beautifully moody arrangement of the Gershwin classic “Summertime” with the lush stylings of harpist Brandee Younger, thus providing a remarkable remedy for the familiar. On “Afro Blue”, listeners are filled with an open palette of sound that brings forth a sincere spiritual offering of faith, strength and resolve. Afro Blue is a journey in and of itself through the collage of solos that express a deep connection to their cultural roots.
An interesting surprise, penultimate tune “Laugh and Move On” is a tribute to a simpler time in music.


“This song reminds me of an era in music that focused on telling a story with a lot of soul and some good ole’ fashioned singing about letting the tough times roll off your back,” says Jean.


Likened to an aria, Jean’s beautiful and sometimes haunting vocal arrangement is sung over Marcus’ dramatic drum solo on the final track “Journey”. Vacillating in and out of tempo and bound only to the rhythm of the soul, the two dance together telling their stories. Intertwined with voices of their personal lineage that give audible accounts of the discovery of their musical gifts, it is the perfect ending to the story and cleverly circles listeners right back to the beginning.
“We want to inspire, foster hope and ultimately, bridge the gap between generations in our culture,” says Marcus. With “The Journey’’, The Baylor project does just that. They are relatable, they are virtuosic, and for these reasons they captivate listeners and packed houses alike. "The Journey” pays homage to their wide-ranging musical influences, and in so doing; they generate an eclectic sound whose overall effect is spiritual, buoyant, and feel good music.
To celebrate the release of “The Journey”, The Baylor Project will be embarking on a tour:


MORE ABOUT THE BAYLOR PROJECT:
"The Baylor Project" is an innovative collaboration merging the talents and creativity of this dynamic husband and wife duo, Marcus and Jean Baylor. Both artists have established themselves in the music community, Marcus as a jazz musician having toured and recorded with Kenny Garrett, John Scofield, Cassandra Wilson, Joshua Redman, Christian McBride and as a long-time member of the Grammy Award Winning, Yellowjackets. Jean first established herself in R&B as a platinum selling recording artist and later emerged in jazz having recorded and toured with Kenny Garrett, Marcus Miller, Yellowjackets, Jimmy Greene and legends, Harold Mabern and Buster Williams. The Baylor Project was founded in 2013.


RECORD LABEL:
Be A Light
thebaylorproject@gmail.com