FLAMENCO TANGO NEAPOLIS: A musical tour of Europe and America with a hint of Afrojazz "It is exciting as these Italian musicians, led by Salvo Russo, manage to
successfully merge genres and rhythms so different - flamenco, tango, folklore and an additive Neapolitan jazz - any melody running" - Luis Raul Montell, jazzglobalbeat.blogspot.com

VIENTO is the title of the new album Flamenco Tango Neapolis: a "traveling music" that departs from Naples to the discovery of an "other" South, of its traditions, of its energy and of its emotions.


The music (original compositions and arrangements of Salvo Russo) represent the essence of a contamination that browses ancient pages with a new look, creating original sounds, fine sounds and respecting tradition always.


And 'so that "Femmena" becomes the muse that inspires Pasion flamenco, that "Viento" recreates the atmosphere of the Argentine milongas and that "Buleria napulitana" bursts with all the energy of a true "juerga flamenco".


The colors of Naples, therefore, mixed with those of Andalusia and South America explode musically creating intense atmospheres enriched on staged by the magic of baile flamenco and Argentine tango.


VIENTO is a picture colorful, romantic and suggestive that is revealed through art and music that captures the mind and heart of the listener on a journey to be experienced!

Flamenco Tango Neapolis is an exciting art project, founded in 2009 and directed by Salvo Russo (Neapolitan musician and composer), joining Italy, Spain and Argentina in a fascinating "musical trip."


The identity of the project is the Neapolitan Song, cradle of history, culture and traditions, that meeting the Flamenco and the Argentine tango, integrates them into an original contamination of styles that recognize Naples as "the Soul" that welcomes them, that blends them and with boldness sublimates them. 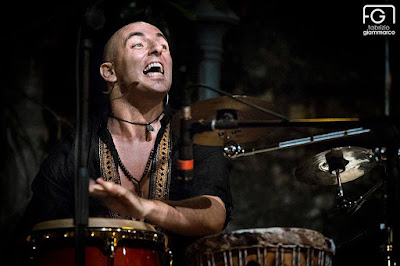 In 1998 he graduated in piano at the Conservatory "S. Pietro a Majella "of Naples under the guidance of Marisa Carretta. He attended the course of preparation for the concert scene with Aldo Ciccolini and performed in concerts as a soloist and in chamber ensembles. He has participated in important national piano competitions, winning numerous awards and gaining critical acclaim and audience. He studied piano with David Peña Dorantes flamenco the "Escuela International de Musica Clasica y Flamenco" Utrera. E 'founder and artistic director of TANGO FLAMENCO NEAPOLIS (FTN), a project that, through music, dance and theater, combining the sounds of classic Neapolitan tradition with those of' Andalusia and South America in an original contamination styles.

In 2010 he created the show with FTN "Encanto" which is staged in several Italian opera houses including the Teatro Sannazzaro of Naples, the Teatro del Giglio in Lucca, the Auditorium GGFF dell 'Aquila, the Cassia Theatre and Teatro Argot in Rome, the Theatre of Ricomposti of Anghiari. The album of the same title "Encanto" is presented and disseminated by various radio stations in Italy, Holland and America. In 2013 began the promotion of the new show "Viento" (which he wrote) that debuted in May at the Teatro Sannazzaro of Naples.

He was trained in music therapy at year course of CEP Assisi and at the SFOM Aosta. He attended a training course in Teaching Method Orff Schulwerk music and many other workshops, seminars and training courses on music education and music therapy. Enchanted by the sounds and rhythms of the natural body, he specialized in techniques of Body Percussion, researching the various modes of production / rhythmic sound. He writes music pieces for the body and keeps Internships and Body Percussion Workshops and Theater of Rhythm throughout Italy, working with various schools, associations and academies of music, art and entertainment Italian. He has been teaching for over 15 years and is the author of many pieces of music for children.

Recently its collaboration with Alma Edizioni teachers' education through the Body percussion and with the Italian Cultural Institute of Athens. He has designed and implemented SOUND AND SENSE, a cultural association which manages and coordinates the activities, initiatives and projects related to teaching, music and the show

Dot Time Records recently signed the exciting flutist Hadar Noiberg
to their growing roster of world-class artists. Most recently, Noiberg was asked to perform at the prestigious 2016 JazzAhead Festival in Bremen, Germany this coming April as part of her European tour.

IN THE WORDS OF THE ARTIST:
"From the Ground Up" is my second album as a band leader, but in a way I feel like it's my first.
What I connect to most in music are touching melodies that captivate me, a lot of groove that will make me move, passion and sincerity in the playing and the freedom to make the music different each time its being played. I'm proud to say that this album and this band have all of the above.
Some might consider the flute to be an instrument that's been looked down upon by the jazz world. I believe the flute is a very powerful instrument. It is a spiritual leader in the Middle Eastern and Far Eastern cultures and I believe I bring forth that energy in this album and in this trio.

The special instrumentation of flute, bass and drums, allows me to have lots of space and freedom to express myself and also create layers of flutes with the help of effects and loops. In that way the flute can be everything - playing the melody, emphasizing the groove and rhythm of the song and creating its harmony!