Adam Birnbaum with its traditional Trio Launches "Three of a Mind" at Smoke Jazz Club on february 11, 2015 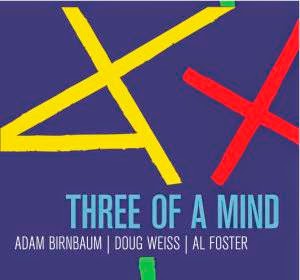 New York City pianist Adam Birnbaum hasn't been keeping a low profile in recent years. While touring internationally with drum legend Al Foster's quartet and subbing regularly in Darcy James Argue's Secret Society and with recently minted vocal star Cécile McLorin Salvant he's also released several well-received CDs under his own name. Still, his new album Three of A Mind marks a major leap for the pianist, capturing a working ensemble with enviable chemistry. Slated for release on February 11, 2015, on Smoke Jazz Club, NYC, the trio session is the work of an artist with unimpeachable taste, exquisite touch, and a commanding vision.
Though Birnbaum is joined by two celebrated rhythm section partners, the album is no ad hoc all-star session. He and bassist Doug Weiss have spent the past six years together working with Foster, and the trio's road-tested cohesion shines on every track. In many ways Birnbaum designed the album to showcase Foster, a drummer who "embodies true musicianship," Birnbaum says. "He has huge ears. He doesn't just keep time. He actively engages you, creating a constant dialogue. If you can learn to ride the wave of rhythms he is throwing at you it makes your own ideas sound even hipper."
A supremely accomplished accompanist, "Weiss is one of the premiere bassists around," Birnbaum says. "His sense of taste, rock-solid time, and superb melodicism make him in many ways the perfect bassist. He doesn't go for flash, but for true music making, and his ears are always open to going wherever the music takes him."
The album opens with Birnbaum's rock-inflected "Binary," an irresistibly upbeat tune that he wrote to slyly draw Foster back to Miles territory. In much the same way, he composed "Dream Waltz" with the trio in mind. An alluring melody with an uncomplicated song form, the piece facilitates some beautifully balanced group interplay. The pianist is at his most rhapsodic on the enchanted ballad "Rockport Moon," and at his most ambitious on the blues-like "Dream Song # 1: Huffy Henry," one of a dozen pieces he composed for a suite inspired by John Berryman's wildly creative poems.

Though Foster isn't widely known as a composer, he's written many memorable tunes, including two that Birnbaum chose to include on Three of A Mind. Written for Foster's son, "Brandyn" is a tricky piece that opens in 12/8 before eventually settling into some sizzling swing. It's a recognizable but significantly reimagined version of the piece that Foster introduced back in 1996 as the title track of his first album as a leader (with Larry Grenadier, Dave Kikoski and Chris Potter). And Foster's pleasingly aggressive "Ooh What You Do To Me" closes the album with a satisfying whomp. No fuss, no muss, this is a trio that takes care of business.
Birnbaum is an award-winning player who has more than lived up to his considerable promise since graduating from Juilliard as part of the first class of the illustrious conservatory's jazz program. Born and raised in Boston, Birnbaum spent his early years studying the European classical tradition. At 13 he got exposed to jazz and turned onto improvisation, and he spent the rest of his teenage years dividing his attention between the worlds of jazz and classical music.
While studying at Boston College, Birnbaum connected with New England Conservatory's Danilo Perez, and the great Panamanian pianist became an important mentor. He graduated from Boston College with a degree in computer science but spent the bulk of his time practicing piano. The shedding prepared him for plunging into the New York scene in 2001 via Juilliard, where he was one of only two pianists selected for inaugural class in the conservatory's new jazz program. He worked closely with piano legend Kenny Barron, and later studied with Fred Hersch "who really opened another world for me," Birnbaum says. 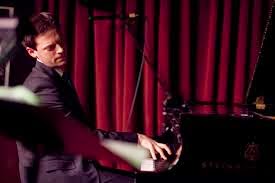 In 2004 he won the American Jazz Piano Competition and became the American Pianists Association's Cole Porter fellow in jazz. In 2006, he received the first-ever "special mention" prize at the Martial Solal Jazz Piano Competition in Paris. More important than any contest was the call he received from alto sax master Greg Osby, one of jazz's keenest talent scouts. On the recommendation of bassist Matt Brewer, Osby hired Birnbaum for a series of gigs starting at Birdland. His phone started to ring regularly after that.
Over the past decade Birnbaum has performed with veteran masters such as Wallace Roney, Eddie Henderson, Eddie Gomez, and Jazz at Lincoln Center with Wynton Marsalis, as well as with well-established contemporaries such as Pedro Giraudo, Marshall Gilkes and Dominick Farinacci. As a leader, Birnbaum has released two albums in Japan under the Pony Canyon label in 2006: Ballade Pour Adeline with Quincy Davis and Matt Brewer (which received a Gold Disk award from Swing Journal as one of the top albums of the year), and A Comme Amour with Ben Wolfe and Rodney Green. Smalls Records released his 2009 US debut, Travels, a critically hailed album with Joe Sanders and Rodney Green.
By far the most significant relationship of his career has been with Al Foster. Miles Davis famously described his first encounter with Foster saying that the drummer "knocked me out because he had such a groove and he would just lay it right in there." Foster went on to spent more time accompanying the trumpet legend than any other drummer, recording more than a dozen albums with Davis, from 1972's hugely controversial On The Corner through his 1981 comeback The Man With the Horn, and all three career-capping sessions produced by Marcus Miller. Sought out by fellow masters, he's also recorded extensively with Sonny Rollins, Joe Henderson, and McCoy Tyner.
Birnbaum set his sights on Foster's quartet when he got word that Kevin Hays was leaving the group in 2009. Not the easiest musician to approach, Foster presented a forbidding front. But after showing up at various gigs around New York, Birnbaum eventually got the chance to sit in at Smoke (with a little help from Weiss). He's been with Foster ever since, while the horn chair has showcased some of the era's most potent tenor saxophonists, such as Dayna Stephens and Eric Alexander. For Birnbaum, the experience has been the ultimate jazz education, "a real connection to another era," he says. "These aren't the kind of lessons you can learn verbally or in a classroom. There's an intensity that Al brings whenever he gets behind the drums. He expects something special to happen every time he plays, and if it's not happening he'll be upset with himself and the band. This is not just a way to make money for him. Music is his life. It means everything to him." It's an ethic that Birnbaum has clearly absorbed, and that manifests itself throughout Three Of A Mind.