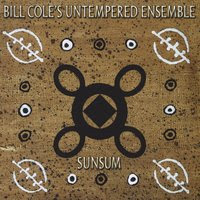 "After 12 years away from recording studios, Bill Cole with Untempered Ensemble invites us on a journey rich Asian and African ancestors live with this production "-
Luis Raul Montell, Jazz Global Beat

Track Listing: 1.- Grounded; 2.- The Dove Finds Peace Everywhere; 3.- Great Loss Is Yours If Your Love For Another Is Not Returned; 4.- A Scar Is Never So Smooth As Natural Skin; 5.- Evil Sown By A Man Will Grow On His Children’s Heads

The Untempered Ensemble was founded in 1992 by Bill Cole as a trio.  The first members of the group were Bill Cole, Warren Smith and Joe Daley.  Later, in the 1990's, bassist William Parker and multi-instrumentalist Cooper-Moore joined the group.  Soon after that, the reed player Sam Furnace was asked to join and then, at the end of the 1990's, Cole's son Atticus became a member of the group, playing hand drums.  This group recorded four CDs for Boxholder Records during the early 2000's and gave numerous performances, including at the Weil Recital Hall at Carnegie Music Hall in New York.

The Untempered Ensemble had appeared in the Vision Festival in New York City seven times when, in 2009, the organizer of the Festival invited the group to appear again, but this time asked whether the group could include a vocalist.  So, for the Vision Festival performance that year, Cole's daughter Althea SullyCole was added to the group. She would later also join the group with her kora. 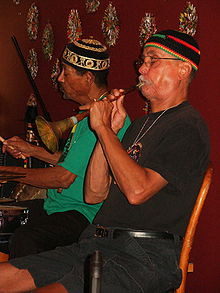 is an American jazz musician, composer, educator and author. An admired innovator, Cole successfully combines the sounds of untempered instruments with an American art form – jazz. Cole specializes in non-Western wind instruments, especially double reed horns: including Chinese sonas, Korean hojok and piri; Indian nagaswarm and shenai and Tibetan trumpet; as well as the Australian digeridoo and Ghanaian flute. Cole is the leader of the Untempered Ensemble, a group he founded in 1992. He has performed with Sam Rivers, Billy Bang, Jayne Cortez, Julius Hemphill, Ornette Coleman, James Blood Ulmer, William Parker, Fred Ho, Gerald Veasley and others; at Carnegie Hall, Lincoln Center, Town Hall, Symphony Space and venues around the U.S. and in Europe; and has recorded for Boxholder Records.

We want to share with you this video of Bill Cole's untempered Ensemble, the most recent in a presentation in Brooklyn, NY: