Robert Irving III-Generations release "Our Space in Time" at The Promontory, Chicago, December 4, 2015 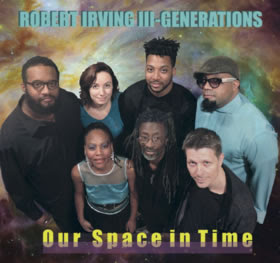 Tracks:
1 Poznan Dream 9:46 Theme melody is from a dream on 11/27/11 while at the Made In Chicago Jazz Festival in Poznan Poland. In my dream, I played the melody on a tree trunk from which sound emanated.
2 Generations 6:18 Main theme is also from a dream during 2014 and the tune was developed as the band’s theme song with a contemporary groove.
3 Energy 8:06 This title speaks of the fact that all is energy in different configurations. Bridge with successive bars of 6/8 and 7/8 was influenced by my work with Indian percussionist, Badal Roy, a fellow Miles Davis alum.
4 Aurora Australis (Interlude) 0:48 The title alludes to the “other” or southern aurora that we don’t often hear about. My poem is a parody on popular culture juxtaposed with a commentary on the plight of Australian Aboriginals.
5 Our Space In Time 6:34 It is estimated that 108 billion members of the human race (the only race) have occupied the earth since the beginning of time. Although, we only celebrate those that created something memorable. The title track is about the opportunity and obligation of contemporary humanity to leave something of lasting value for the generations to come. The main melody is from a dream of a big party in Paris attended by many of my musician friends. I make my "singing" debut on this track, "What we gonna do with our space in time..." joined by my wife Laurence d'Estival Irving with French spoken word, which translates, "What else is possible and how does it get better than this?" Bassist Emma Dayhuff sings the chorus melody, "How can you choose in the moment how to play it, what to say, when all that matters, is what comes from the heart; and when the stories end, who will even know you ever existed, if you didn't make a difference; now's the time to start: ("to figure out exactly what your contribution will be... in our space in time.").
6 Roads Less Traveled 6:35 I wanted to compose a modern jazz piece that broke boundaries with free jazz elements, however, “arranged and orchestrated”. I think of the passage just prior to the refrain as a “space tango”.
7 Octobre 10:54 This tune was inspired by autumn colors and melancholy experienced during trip to France and train ride through Brussels on the the way to a festival in Maastricht in the Netherlands during the month of my birth: Octorbre (French spelling).
8 Maat 10:42 Matt is the Ancient Egyptian concept of balance, truth order and morality as personified by the goddess of that name. The composition draws from the many rhythmic influences of the region as it moves between Latin, swing and African grooves.
9 Amor Incondicional (Interlude) 0:57 Melodic theme inspired by my love for Brazilian music. The full version will be released on the next Generations project.
10 Every Today 13:44 Title is based on the notion that in some indigenous African cultures, there is no word or concept for “yesterday” or “tomorrow” as all is one continuous today. All time is now, in 6/4! All songs composed and arranged by Robert Irving III Copyright © 2015 Vitasia Music Publishing Co./BMI 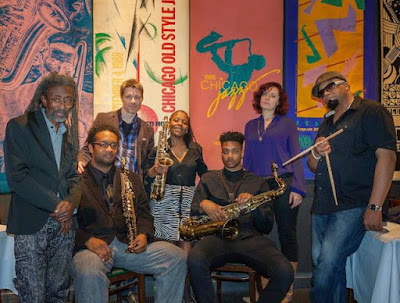 Robert Irving III, known as the longest collaborating composer, producer, pianist and musical director for the legendary Miles Davis bands of the 1980’s, has released his third album as a bandleader,“Our Space In Time” on the newly revamped Sonic Portraits Jazz imprint. Irving says, “The brilliant idea of my wife, Laurence d’Estival Irving to create a band with my young mentees from the Jazz Institute mentoring program, espouses the notion of an ancient future as we jazz musicians look back to find inspiration to move forward.” In 2014 as Irving planed his annual Miles Davis birthday commemoration performance in Chicago, his wife implored him, “Just as Dizzy mentored Miles and Miles mentored you, likewise, you must start utilizing the young musicians you’ve been mentoring to make them a part of your live performance groups.” The first evolution of Robert Irving III- Generations featured an exceptional young trumpet player, Barrett Harmon with Laurence d’Estival Irving on alto sax and Irving’s 20-year old mentee, Irvin Pierce on tenor saxophone with Bob Davis on guitar, Emma Dayhuff on bass/vocals and Irving’s cousin, Charles “Rick” Heath IV on drums. When Harmon damaged his lip, Irving decided to replace him with a third woodwind player, who is also his Jazz Institute mentee, 25- year old, Rajiv Halim on soprano saxophone and flute. Irving explains, “I played trombone and other brass instruments in gradeschool and high school, but I always had a passion for the sound of woodwind ensembles.” Scott Hesse eventually joined the band on guitar. Although the band began with Miles Davis repertoire composed and/or arranged by Irving, it soon evolved into a vehicle for Irving’s new compositions created specifically for the group. Irving observes, “In jazz, there are creators of the music and there are interpreters of those creations. From the beginning my attraction has always been to the former class, although, somehow, through years of integration of lessons learned; I developed my own voice as a interpreter that has become commensurate with my esthetic as a composer and arranger.” The new CD features ten original compositions by Irving with four originating from dreams. One of those is the title track, Our Space in Time, which Irving says, “is about contemporary humanity’s opportunity and obligation to create something of value for future generations. “In my value creation process, I personally look back to Wayne Shorter as a composer, Gil Evans as an arranger and Miles Davis as a stylist and extraordinary bandleader. My forward looking is, confidently, towards the gifted young musicians in this band.” Group Biographical Sketch Irving’s wife, alto saxophonist, Laurence d’Estival Irving, a native of Paris, France, has performed with Archie Shepp, David Murray, Roy Ayers, George Clinton, Fred Wesley and Pee Wee Ellis. Charles “Rick” Heath IV is also currently the drummer for the Ramsey Lewis Group and played the show The Color Purple. Bassist, Emma Dayhuff is a recording engineer and producer of recordings for the Chicago Symphony Orchestra in addition to being in high demand across genres from jazz to country music. Guitarist, Scott Hesse is a music educator who has performed internationally with Dee Alexander’s Evolution Ensemble, Stafford James String Ensemble and the Victor Garcia Organ Group. Rajiv Halim and Irvin Pierce are both leading their own groups as highly recognized ‘young jazz lions’ who have been compared to Cannonball Adderley and John Coltrane respectively

Although All Music Guide (allmusic.com) credits Irving as a contributor on 97 album projects (26 of those as a producer), “Our Space In Time” is only his third official outing as a bandleader. The release is on the newly revived Sonic Portraits label that is now rebranded as Sonic Portraits Jazz. The label originally launched in 2007 with the release of Irving’s trio project entitled, “New Momentum” that featured Buster Williams on bass and Yuseff Ernie Adams on drums with appearances by Marlene Rosenberg produced by drummer Terri Lyne Carrington. During the interim period, in 2009, Irving was commissioned by the Jazz Institute of Chicago and the Chicago Department of Cultural Affairs to create the orchestral suite, “Sketches of Brazil,” which was premiered at Millennium Park in Chicago with a 34-piece orchestra featuring trumpeter, Wallace Roney and Fareed Haque on classical guitar to a crowd of 12,500 with three standing ovations; but there was no commercial recording. The piece was created in homage to Irving’s mentors, Gil Evans and Miles Davis on the 50th anniversary of the pair’s Sketches Of Spain recording. Irving hopes to remount this project in 2016 around the Brazilian Olympic games for subsequent release on the newly re-formed Sonic Portraits Jazz label. Irving adds, “2016 is also the 30th anniversary of my first trip to Brazil in 1986 with the Miles Davis Band.” In 2011 Chicago bassist, Frank Russell released his second solo project, “Circle Without End” on the Sonic Portraits imprint. There are plans for several subsequent releases including the third CD of Irving’s wife, Laurence d’Estival Irving, “No Limit” and a live album project from the Irving couple’s collaboration with French musicians bassist, Joachim Florent and drummer, Dennis Fournier along with special guests, saxophonist, Ari Brown and guitarist Jeff Parker in a program of spontaneously created music recorded at PianoForte studios in November 2014 as a part of “The Bridge” project that fosters collaborations between creative musicians from France and Chicago. Irving also plans to re-release a remastered version of his 1988 debut album “Midnight Dream” on the label along with a third Frank Russell CD project now in production. Irving adds, “there are several other releases being contemplated including a second Generations recording.” The band Robert Irving III Generations celebrated their oneyear anniversary with a recent performance at the 37th Chicago Jazz Festival. Prior to this the band had a pivotal twomonth run every Tuesday night during March-April at Andy’s Jazz Club in downtown Chicago. Irving notes, “This engagement gave us the opportunity to expand our repertoire of original compositions to 14 tunes. It also gave us a chance to assess the audience response to new and unfamiliar music prior to recording.” Building on this, the group continued to perform club dates and large neighborhood festivals leading up to their Chicago Jazz Festival debut on Labor Day weekend before an audience of 5,000 fans. Irving says, “Someone came up to me after that performance; as with almost every performance and said,

‘I was blessed by the music.’ This is not something that I would normally expect to hear about a jazz concert. However, I think that because a large amount of the music came from dreams and because we tune at A432 hertz; (and not the standard A440), there is something otherworldly about our sound that people can feel on a deep level. Some refer to what we do as being jazz church.” Guitarist, Scott Hesse notes, “When people hear this music there is a real connection that is made and from the band’s point of view, what you really want, is to connect with people.” Irving’s wife and band co-founder, Laurence d’Estival Irving says, “The band has accomplished a lot in one year with 18- performances, a successful crowd-funding campaign for our CD project and the Chicago Jazz Festival engagement.” For her, all of this is full circle from her childhood in Paris, France. She was 14 years-old when her mother purchased the album “Decoy” by Miles Davis, with music composed and produced by Robert Irving III. She recalls, “I heard this album on a daily basis until the vinyl literally wore out. The cosmic sound of this music inspired me to learn the saxophone with the goal of playing with Miles Davis.” She and Irving met about 12-years later during a David Murray workshop in Paris in 1995, which also traveled to Senegal the following year. Just after this, young Ms. d’Estival spent three-months in Chicago working with Irving’s bands, School of Cool and the African Arts Ensemble in 1996. They remained close friends and collaborators over the next 15-years. While in Chicago in 2012 to mix her new album, Ms. d’Estival and Irving realized they were both free and available at the same time and decided to get married. Irving says, “For me, our story is reminiscent of the love affair between Miles Davis and French singer, Juliette Gréco when he was 22 years old… only our story eventually progressed to the happy ending.” The band Robert Irving III-Generations is pursuing 2016 festivals in France to continue extension of that full circle and add some chapters to the story.