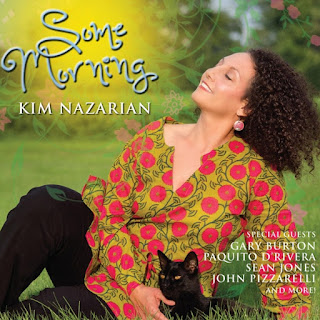 "She was a founding member and soprano one of the most famous vocal groups: New York Voices, but his charming voice (soprano), the talent and lyricism have now led to a successful personal project" 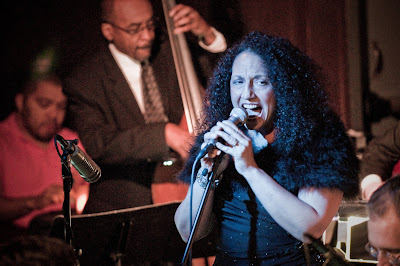 Vocalist, teacher, lyricist, Grammy-nominated arranger, and Grammy award-winning ensemble singer, … try and fit a ball of positive energy into a category and you will break the box!

Kim Nazarian is the soprano and one of the founding members of the New York Voices, the only vocal group in recent memory to win two Grammys for live concert recordings (one of Brazilian music with Paquito D’Rivera, the other for Big Band Jazz with the Count Basie Orchestra). She has recorded, performed and toured the world with this outstanding vocal ensemble for the past twenty years. Her voice is featured on several MCG Jazz releases (mcgjazz.org), among them "Afternoon In Rio" with Joe Negri, (yes, Mr. Rogers’ Handyman Negri!) "The 21st Century Swing Band," the highly acclaimed "A Nancy Wilson Christmas," and "Long Ago And Far Away," her original, interactive children's concert, which has grown into a radio show now available on CD through MCG Jazz.

Aside from her work with MCG, Kim was a featured vocalist alongside Ray Brown and Stanley Turrentine in the Pittsburgh Ballet Theatre’s production of "Indigo In Motion" and has appeared with the Pittsburgh Children's Festival Chorus. She has taught at Duquesne University and the Ellis School, recorded with the Big-Band at Slippery Rock University and continues a busy schedule in her private teaching at home in PA. Kim has also recorded "Red Dragonfly In New York” for JVC in Japan. The album contains Japanese folk songs translated into English and western musical contexts. As a singer and lyricist for such artists as Masahiko Osaka her work has won the “seal of approval” by Japan’s Swing Journal.

Always passionate for Latin Music, Kim performs and records with Boston-based El Eco, whose album “Two Worlds” was recently featured on NPR’s JazzSet. Other collaborations include her work performing and recording with Mark Shilansky, her vocals featured extensively on his most recent recording “Join the Club.”

A more recent recording opportunity for Kim was her work on Bobby McFerrin's critically acclaimed Vocabulaires.

With husband, arranger, trombonist, percussionist, and Grammy-winning producer Jay Ashby, Kim has worked on many projects, toured the Czech Republic and Russia, and performs regularly in Pittsburgh and around the country. Their latest joint effort is the creation and recording of an original song for the record “Music To Make The Impossible Possible” - a CD of new and classic jazz that inspired renowned author and humanitarian Bill Strickland; author of “Make The Impossible Possible” - a guide showing how to achieve your dreams - using Jazz as a metaphor for success.

Kim has worked with and conducted choirs around the world, including the NY State Vocal Jazz Ensemble and the Arizona All-State Jazz Choir. Kim shares her perspectives on music and life as a musician through teaching private students, clinics, workshops, jazz camps, master classes, festival adjudication and guest conducting for singers on all levels from grade to graduate school in the US and abroad.

Instrumental to her teaching as well as her personal life is the constant challenge of balancing the responsibilities of family with the demands of a career in music. Seeking joy and rich creative soil in both raising her son and the ever changing facets of life, Kim’s work continues to inspire vocalists around the globe.

Now Kim extensive experience in concerts and recordings launches a fascinating "Some Morning" to the delight of his thousands of followers.